The Times, or at least The Sunday Times, has a history of getting things wrong about Hitler.

And it seems to have happened again. This was the response by Schalke 04, a German football team, to the latest mistake… 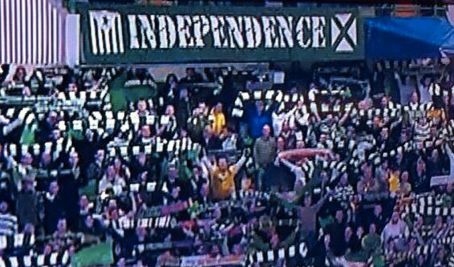 Contrary to the cliché, sport and politics DO actually mix. Whether you think that is a good thing or not is where the debate comes in.

Most people seem to like politics at football (or sport in general) as long as it is politics they agree with.

In order to see where you stand on the political issues you could compare your reactions to what Tommy Smith and John Carlos did at the Mexico Olympics or Emily Davidson becoming a martyr for the suffragette movement to some of the right-wing banners you see, for example, amongst the Serbian fans.

I was happy last night because there were two little political bits that I noticed that were both up my political street. At the Celtic V Barcelona match I was happy to see this banner in amongst the support…

But I’d have to say that yesterday the politics in football trophy goes to Greenpeace for their amazing protest which involved abseiling off the stadium roof and unfurling a huge banner at the Basel V Schalke match.

Here are a couple of videos of the event. I also notice that UEFA are blocking some of them…