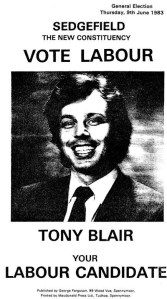 I’m sure you’ve all seen this lovely picture of His Bliarness before, but have you actually read the full leaflet?

I’ve put the full things on the read more continuation page but for the moment I’d just like to highlight a couple of little bits that raised the eyebrows.

In the part called “Defence Madness” you can find this…

“The Tories would rather spend £10 billion on trident missiles, than try to stop the growing nuclear arms race.”

And so Labour did what?

Also, in the section where Labour responds with their own policy, “Labour’s Sensible Answers” they lay out that they are going to have a “more sane defence policy”. I like this because they don’t actually promise a sane defence policy, just more sane than the Tories, who they’ve just described as mad.

Actually, on the subject of insanity, Einstein defined it as…

Doing the same thing over and over again and expecting different results.