I think I’m prepared to bet that we are going to see a stark example of the British class system in action in the next few months. 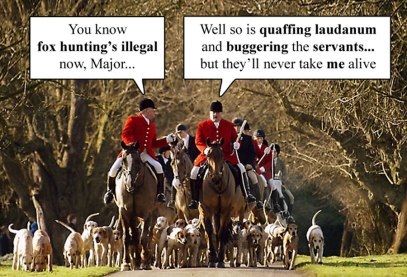 You see, at the Epsom Derby, which is a jolly day out for many of the more rah-rah elements of society, it seems that there was a bit of crowd trouble.

What I expect to see unfold is that the individual offenders will be singled out and put on trial, which is all as it should be.

One way that it will provide us with a clear example of the British class system is that if the offenders  turn out to be upper-class types, they will most probably be treated as individuals who became a little over-enthusiastic on the day. If they were not of the “right sort” then they will probably be much more harshly treated.

However, this won’t be the most glaring thing.

I’d bet my wife’s left ball (joke) that whatever happens, the people who frequent racecourses will not be subjected to the kind of collective punishment that all football supporters have to suffer because of the misbehaviour of a few.

The idea that sport is “war minus the shooting” has been written about too much but the Italy V Serbia match that was abandoned in midweek throws up an interesting question.

In case you don’t know what happened a group of Serbian right-wing bigoted thugs rioted outside the ground and inside. They also proceeded to throw flares and fireworks onto the pitch and nearly hit the Italian goalkeeper a couple of times. One report even suggested they managed to get in the ground with boltcutters in order to cut their way through the segregation fences.

The match was eventually abandoned after 7 minutes in the interests of safety.

In the aftermath UEFA, the controlling body of European football, decided to award the victory to Italy with a 3-0 scoreline. This punishment has been applied before although not uniformly.

This relates to “war minus the shooting” because collective punishment is  something that often happens in wartime. Someone does something wrong according to whichever government or army is controlling the area and everyone is punished for that one person’s mistake. This is effectively what has happened to the Serbian players and the non-rightwing thug supporters of the Serbian team.

I don’t often defend footballers as they are often spoilt, overpaid brats but the principle is nonetheless the same. Why do we accept this kind of “justice” in sporting terms when it is clearly unacceptable in society as a whole?

The Football Association of Serbia are appealing against the decision they are appealing on the grounds that the Italian police failed to control the Serbian fans that were making trouble. They say that they supplied information about the people in advance and that the incompetence of the Italian police is something that they should not be punished for. They don’t make any mention of collective punishment being unfair.