During the 2014 referendum campaign, the Better Together campaign, in such a way that it was difficult to decide whether it had been done with a lot of copy and paste or on the back of a cigarette packet in the pub, produced a list of 500 questions. It was co

mplete with typos and grammar mistakes too.

Some of them were ludicrous, such as “How much would a first class stamp cost in a separate Scotland?”, or “What is the Scottish Government’s strategy for achieving a separate Scotland’s membership of the World Meterological Organisation?”.

As another blogger pointed out, most of them could be answered by “we’ll fill in the application form” or “we’ll do the same as every other country”. However, I took a quick glance at the list again and think about where we are now. Where necessary, play around with the names of the countries and nationalities involved and see where that takes you.

The 178th episode of The Scottish Independence Podcast is a long in-depth look at the Scottish economy and what may happen after Brexit. It features friend of the show and someone who has been a guest several times, MSP Ivan McKee.

Before that however, we’ve someone getting Farage telt, and after that we’ve got, just for the change of it, someone saying Scotland won’t have any problems getting into the EU at all.

He spoke about what I outlined above, and also responded to some criticisms of the growth commission and gave an idea of the thinking behind it. You may or may not agree with everything that is in it (I don’t, and some of the audience members at the talk didn’t agree either), but it is useful to hear the rationale behind it.

“I think if you had got a group of mysogynists in a room and said ‘guys, how can we make this system work for men and not for women?’, they wouldn’t have come up with too many other ideas than what is already in place”.

The 173rd episode of The Scottish Independence Podcast is the much talked about report by the UN Special Rapporteur on extreme poverty and human rights, talking about the UK.

It’s so important I was going to just read the whole thing out and put that out as a podcast but fortunately for me there was a presentation and a Q&A, and here it is.

Another in the wonderful series by Phantom Power.

This time it is Clive Ponting, a man who really knows what the British Government tends to get up to and why.

It’s partly an interview and partly taken from a talk. I am pleased to announce that in a sort of double feature, the new episode of The Scottish Independence Podcast (out tomorrow), will be that talk in its entirety, unedited.

That’s for tomorrow, but for tonight, here is Clive Ponting’s Journey To Yes (all the others in the series can be found here).

The 168th episode of The Scottish Independence Podcast is a mix of some recent things that you won’t want to miss.

Here you’ll find a psychic that didn’t seem to predict the consequences of telling a nation of people to go f*ck itself, or how much of an idiot she would like when she was doing it.

There is also a good speech from Westminster which provides good and useful historical information on the history of Scottish home rule. However, given that the speech was delivered in Westminster, it was accompanied by quite a lot of petulant, ill-informed and childish nonsense that came from the government benches.

Finally, which Tory MP seems to want a large number of Scottish people to commit suicide? I imagine that some of you reading this are saying “quite a few of them want that” to yourselves, which is possibly true, but one of them said it out loud in public. 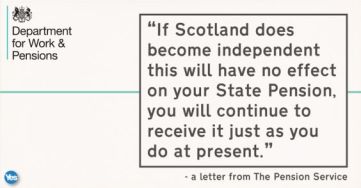 The 166th episode of The Scottish Independence Podcast features, amongst other things, an interview with Peter Swain of Pensioners for Independence (courtesy of Independence Live).

You’ll also find out why I was very tempted to call the episode “Archie, Archie, What’s the Score?”, even if part of that joke will only make sense if you were born before 1985.

I also had to include Boris Johnson, or as he is known in Scotland, Bawjawz, trying to justify some of the worst Tory behaviour. As he does so, he is kind enough to show just how far removed from you and the rest of reality in the process.

Finally, there’s a semi-unrelated part relating to how the BBC will shut down certain discussions if you go off script.

Another one from Colin Dunn

Here are some other things that were worth a post of their own.

About a month ago I found the image below.

I noticed that the only people I hadn’t had on the show among the conveners and voting organisations were Elaine C. Smith (I’ve tried – can’t seem to get in touch with her), AyeScotland, Christians For Independence and Pensioners for Independence.

I then immediately tweeted out asking if any of those organisations would like to come on the show for a talk about independence. The first I managed to organise something with (and I’ll be working on the others shortly) were Christians for Independence. 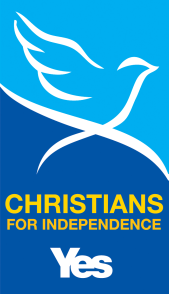 I’m not a religious man myself so I thought it would be interesting to hear their perspective and, as the guest, Dave Thompson – former SNP MSP and convener of the group, pointed out in the show, over 400,000 people regularly  attend churches in Scotland every week so is this a demographic the indy movement can afford to ignore? 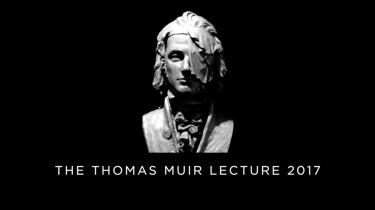 The 156th episode of The Scottish Independence Podcast features the Thomas Muir lecture for 2017, which was given by Tommy Sheppard MP (who has also been on the show himself).