We are still in the middle of the umpteenth nauseating shitfit thrown by the Unionist media. They usually throw the toys out of the pram in this manner when somone mildy criticises them for the untrue and vicious invective they throw at the independence movement every day.

One of the actors in this particular chimpanzee-fling is Lib Dem MSP Alex Cole-Hamilton. He is complaining to OfCom about the treatment of a particular “journalist” and how it is all unfair to treat the media in this way.

From how he and others are talking you’d think it was the case that the independence movement, with much less coverage and much less funding, was drowning out a frothing and almost all pervasive unionist media.

If this is the case (and it isn’t), how does this all square with this little message left by the libdems, for journalists who came to their party conference a while back? Furthermore, what does this little lovenote say about the impartiality of the media on the Scottish independence issue? 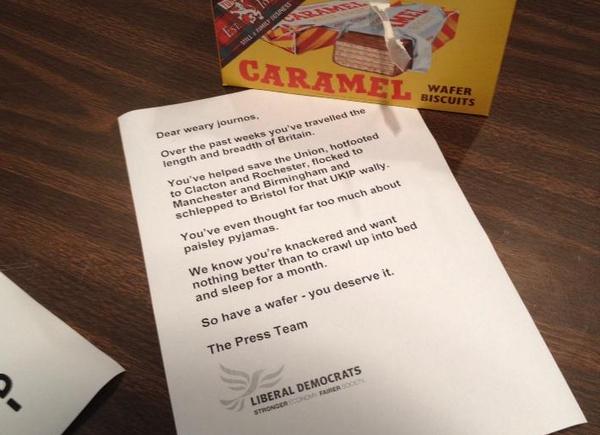 Advanced silliness on the Scotsman site yesterday, with no named journalist.

A row has broken out in the pro-independence camp over a giant SNP billboard campaign urging voters to use both of their votes to protect Nicola Sturgeon’s majority at Holyrood.

But Greens elections convenor Sarah Beattie-Smith said: “Greens agree a better Scotland is possible but voters know to achieve this we’re going to need a bolder Holyrood. That’s why the momentum on the regional vote in this election is with the Greens.”

SNP campaign chief John Swinney said; “We are the only party with the strength, the unity and the vision to take Scotland forward.”

This piece is basically “we’re bored and have nothing, so let’s have an SNP bad swing and see if something sticks”.

Unfortunately, as you can see from the comments under the ‘article’, some people obviously do.

What it boils down to is that the SNP want you to vote for them, and the Greens would prefer you vote Green. This is apparently a row and presumably means that an independent Scotland would fail or something.

Some BBC Scotland output, a political debate no less.

Something seems to be missing though, can you work out what it is? 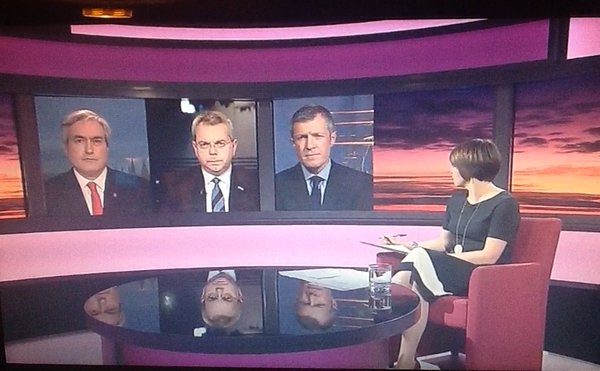 In a recent BBC World Service Programme called “The Bin Laden Tapes“, the BBC got round to mentioning something that probably a lot of you felt might have been discussed more in recent years.

Specifically, in passing they mentioned that the US government had been funding Bin Laden and the Mujahideen in times gone past. The story goes that this was because his group was being used against the Russians in Afghanistan. None of this is secret anymore.

One thing that struck me as odd about the way the BBC handled the matter in this programme however, is that they described it as “awkward” for one of the sides involved, but not the other.

Skip on to about 9 mins 15 and you can hear it for yourself.

Now why would they describe it in those terms?